Like Trollz0r, this character is based off a popular subject on the internet. Sadly it became his curse as well.  He became more of a hermit to keep others safe from his ability and stays away from civilization.

Right when he was born, the doctor was the first to be killed by his laser shooting out of his mother's womb. After that his parents have tried to keep his laser contained and had to resort to a muzzle. Whoop didn't care if it meant keeping those around him safe. He would comunicate through writing or sign language meaning holding out signs. when he became older, he felt that he needed to live out on his own away from others for their safety. where he thought was a uninhabited forest area turns out to be a place where a person named Wolf lived.

After meeting Wolf and his enjoyment of his laser, Whoop accepted Wolf as his best friend. Whoop knew that Wolf could take care of himself if he ever had an accident with his laser problem. This also gave him confidence to live life without worry. Though he knew Wolf had other friends of his own and couldn't wait to see them.

Fires a big destructive laser, but at random times. 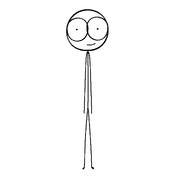 Voice of Carl when Whoop is normal.

Voice of Dr. Octogonapus when Whoop is about to use his laser blast.

Retrieved from "https://dickfiguresfanon.fandom.com/wiki/Whoop?oldid=29840"
Community content is available under CC-BY-SA unless otherwise noted.