Wednesday is a fictional character in the Dick Figures series. She is a goth girl who is very caring, but sometimes violent and easy to piss off. She lives with her younger brother, Lord Tourettes, in the Shit Piss Fart Woods.

Unlike her brother, she does not have Tourettes Syndrome, but she does seem to have a similar quirk as Lord Tourettes, and that is when she is angry, her eyes would become red (similar to how Lord Tourettes' eyes turn red whenever he spazzes).

Her color is Dark Green, but her mouth is black (to make it seem like she has black lipstick on).

She is friends with Stacy and Pink, but at times Stacy can be a real pain in the neck to her. Unlike most people, she doesn't find Blue to be lame or boring. She actually finds him real nice, smart, and interesting, and she has some sympathy towards him since he has to deal with his roommate every day. She dislikes Red because she knows Red has killed Lord Tourettes a couple of times, plus he is always dragging Blue into situations that would sometimes involve him getting hurt.

She has a crush on Broseph, and most people seem to be aware of this (they're just not happy about it). People try to keep her away from him as possible, but she ends up electrifying them with a taser. Because she and Broseph hardly get to talk to each other, she doesn't know much about him, nor does she know about his name. Just because of Broseph's color, she for now calls him "Grey". The running gag is when people try to tell her that's not his real name, she is either ignoring them or is distracted from something else. Whenever Broseph tries to tell her his real name himself, she would somehow end up interrupting him or something is distracting her as usual.

She doesn't trust Earl Grey because he drained Lord Tourettes' color, but she does like Darla. Even though Darla can be quite a brat to Wednesday sometimes, she still finds some innocence in Darla, especially since Darla is still upset about Earl Grey's death. Wednesday started to feel even more sorry for her since the events of Today is Wednesday.

Because of her crush on Broseph, she and Emily were enemies and often fight for him. However, in The True Girlfriend, Broseph confirmed he was Wednesday's boyfriend because of how young Emily was and what Darla got Broseph to do. They also kissed for the first time. Now that Emily has a clone of Broseph as her boyfriend (so both girls can have their own Broseph), it is unknown if Wednesday and Emily are still enemies or not.

She is friends with Stick775 and both of them can sometimes be seen together at a coffee shop. Whenever Stick775 freaks out when she is around, she would give him a cup of coffee to calm him down.

She doesn't trust Wolf due to what happened at the manly beach battle and that he accidentally sent her and Lord Tourettes explosive Christmas presents.

After Rapper saved her from Bruce and his gang, she and a bunch of her other friends began to like him.

Wednesday's first appearance in Sailing Out To Death.

Wednesday and Emily fighting over Broseph.

Wednesday rooting for Broseph in Bros Before Bras. (Image made by Alpha-Lonewolf)

Fighting over Broseph as always. (Image made by Alpha-Lonewolf)

Getting ready for the manly battle. (Image made by Alpha-Lonewolf) 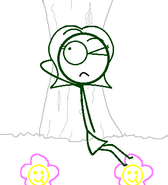 This is when she hears the rocket Raccoon was tied to heading towards the woods.

"What the fuck is happening?!"

"God damn it! Leave me alone!"

Lord Tourettes and Wednesday with their "gifts" from Wolf in Having a Blast.

Wednesday in Resident Zombies Memesis Pt 1. (Image made by Alpha-Lonewolf)

Wednesday with Lord Tourettes in The World's End. (Image made by YoshiRocker13)

Wednesday with Broseph (who has a cyborg eye) in Dinner Party.

A very young Wednesday seen in a flashback in Today is Wednesday. 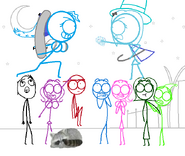 Wednesday watching the fight between Darla and Midnight Blaze.

Wednesday in Lord Tourettes' mind. (Image made by YoshiRocker13)

Wednesday at Blue & Pink's wedding in Wedding Day. (Image made by YoshiRocker13)

Lord Tourettes giving Wednesday a taser for her birthday. (Image made by YoshiRocker13) 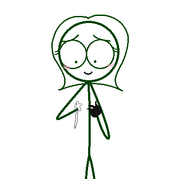 Wednesday with her birthday gifts from The Perfect Wednesday.

Darla freaking out in front of Wednesday in Perfect Hot Chocolate.

Wednesday escaping the underground world in Today is Wednesday.

Wednesday with her taser.

Wednesday showing that she is pregnant in Birth on Wednesday. (Image made by YoshiRocker13) 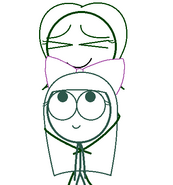 Wednesday with her daughter, Sabrina. 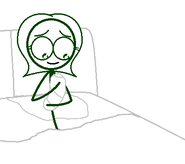 The voice of Gwen from the Total Drama Series.

Retrieved from "https://dickfiguresfanon.fandom.com/wiki/Wednesday?oldid=43862"
Community content is available under CC-BY-SA unless otherwise noted.