A comedy collaboration of Dick figures by the members of the Fanon wiki. Anything you want to submit? Send it to my wall! :D

(Stick775 and Wednesday are seen in a Coffee shop)

Stick775: You never remember you are in a middle of a dream and you're in the middle of something...

Wednesday: Well we just came from the...

Stick775: Your actually in the workshop sleeping, this is your first lesson in dreaming.

(They see the coffee mug rattling, then huge force of wind blasts from ground, then 3 rockets shells blast out from 2 buildings. Then the force of wind destroys a car, soon the windows of the shop cracks. Soon Stick is hit by a trash can and Wednesday a cheeseburger hits her, stopping the dream.)

Stick: It was just a dream. Your face looks like you were hit by a cheeseburger. Feels real.

Broseph: That explains why she wakes up weirdly in the morning. 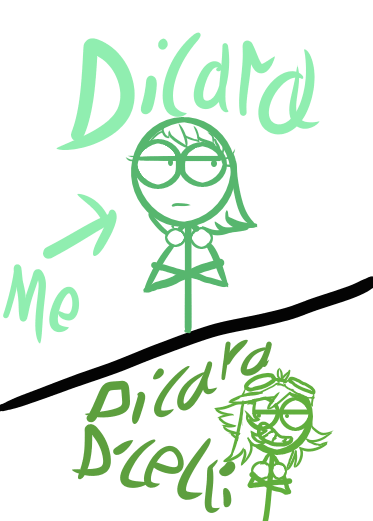 (HungryGrox sits in his kitchen, staring at a window in front of him with 60 pancakes stacked on a platter. Stick775 walks into the kitchen and stares at the pancakes then he walks up to HungryGrox)

HungryGrox: You are not gonna get any pancakes.

Stick775: (Screaming in anger) FUCK YOU! (Runs out of kitchen) 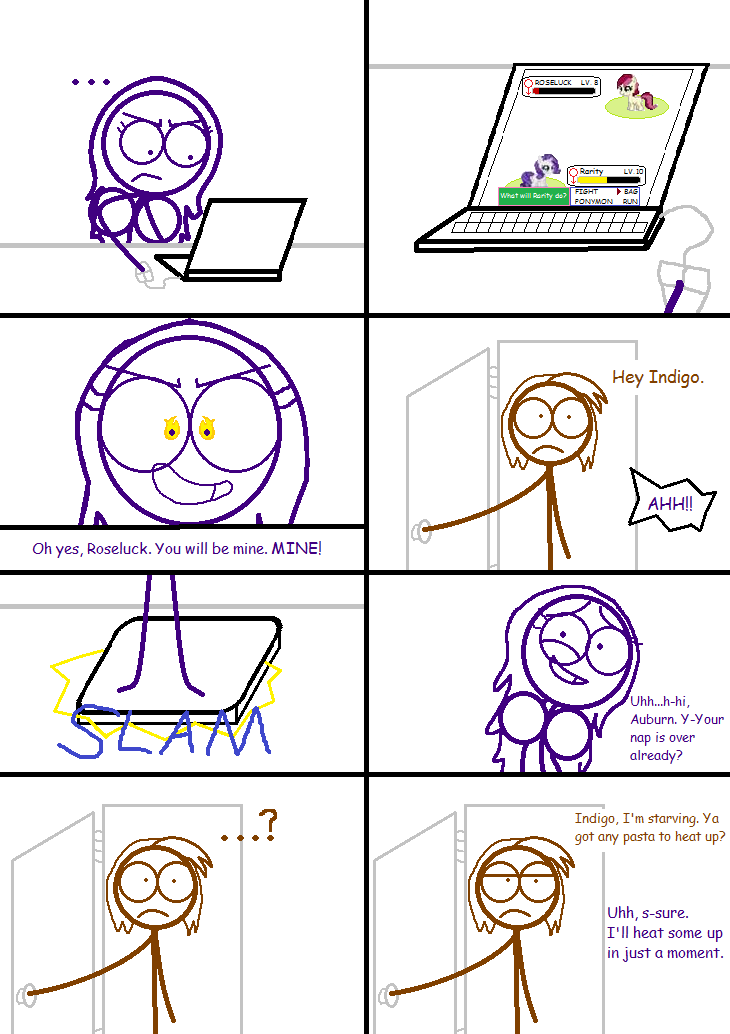 Fifi Meets A Cat (by Alpha-Lonewolf)

(Fifi walks down a the sidewalk with cookies on her eyes)

(Fifi trips on something and falls)

Fifi: OW! (starts to cry) I don’t want to be your sister any more ground.

(A cat meows at Fifi and she turns to see it)

Fifi: Bleah! That didn’t taste sweet and cute at all. The clouds lied to me!

(Blows raspberries at the clouds and skips happily on her way)

Fifi Strikes Back (by Alpha-Lonewolf)

Emily: Bitch please, you can never be as cute as this.

Fifi: Wow I want to try that.

(Does an even better and cuter puppy eyes and face while people make adoring sounds towards Fifi. Fifi is then declared number one)

Emily: (Pissed off) I really hate you.

Wolf: (Wolf brushes self off) Leveled an entire country in one minute. (Words OVERKILL BITCHES floats above Wolf's head)

Rapper: (glares) I hate you.

Wolf: I hate you too, now run along and have fun losing. (Wolf shoots Rapper in the face) (talks to the screen) Don't do drugs kids.

Blue: We want to dedicate this comic to the U.S.A.

(Both stare towards the center)

White: I don't think anyone can see me.

Blue: (face palms) Why did I think this was a good idea?

Wolf: Rapper hold it! I think I got the perfect costume for you!

(Wolf scribbles a marker pen on the back of Rapper's head)

Wolf: Let's just say you got eyes on the back of your head now. (Laughs)

Rapper: All I know is when I see what you did, I am going to kill you.

Spark: (shows up in his Goku costume) Hey Damon! Guess what? I'm Goku for halloween!

Damon: That's great. In fact I got a good scare for halloween

(Spark then is stunned in fear)

Blue: Happy Birthday from me and all of us here at...

Wolf: They don't call it a birthday blast for nothing. HA HA HA!

(Shows Red sneaking up to a burrito on a plate)

Reporter: Only one Hour until the ball drops and...

(Missile shoots up and blows up the ball)


Reporter: What the hell!?

Rapper: what are these glasses for?

Rapper: Why do I need them for my gift?

Wolf: To make it look even better. I had to do a lot to get it.

Rapper: Fine what is it?

(Wolf whistles at a cake and Fox comes out of it saying happy birthday. Rapper sees Fox as if she was in detailed form instead of stick figure form)

Wolf: (Looks down at Rapper on the ground) Crap. I think his eyes exploded with his penis.

Yoshi: Hey Wolf! I got you a birthday present!

Wolf: I don't celebrate my birthday, and you really wanted to get me a gift after what I did to you on YOUR birthday?

Yoshi: Just a way to show peace! I got someone to sing for you!

Wolf: I'd probably kill the singer, but fine.

Fifi: Happy Christmas to you Wolfy! I got cookies! (eats them and sings to him)

Get Me the Fuck Out of Here! by PeroFan123

(Broseph is sitting in a jail cell, hanging his head in shame. Wednesday approaches the cell and he immediately gets up from the cell bed.)

Broseph: Wednes! Oh, thank God you’re here! You gotta bail me out, babe! You have no idea how much bullshit I’ve been going through.

Wednesday: You’ve only been here for about three hours. How much stuff has happened before I got here?

Broseph: Oh, let me tell ya. First, while I was lifting weights, some buff asshole comes over and drops a 50 pound dumbbell on my legs. Then, when I went to take a shower, I accidentally dropped my bar of soap, so I just stood there for the rest of my shower without anymore soap to wash myself with! And the worst part is: I didn’t know until after my shower that my dad and his friend are sharing the same cell as me. (whispers) And he’s being super creepy right now, man.

(Camera cuts to Gerald Butler sitting on a double bed, looking absolutely bored, while Earl Grey sits down next to him with a large book in his hands.)

Earl Grey: So, I figured that the best way to cope with our five-year sentence (claps his hands together while looking up with sparkling eyes) is to find religion. (looks back at Gerald) Now, the prison library was all out of bibles, so from now on we’ll be worshipping… (looks down for a moment before showing the book cover) “The Warumo Gang: The Gods of Chaos” (clears throat before opening the book) Chapter One: …Ḱ̸̸͢N̴҉͜E̴͜͜͜͢E͏͡Ļ̷̀ ͏͝B͘͟E͏̕F̶͢҉͏O҉̡̛R̵͟E͟҉ ̵̡͟T̷̸̷̡͝Ḩ̨́Ȩ̡ ͘Ẃ͝A҉̡R͏͟҉͜͝U̴͘͡M͏̵̧O̵̧͞ ̴̴̵̧G̛̛̕͞A͢҉͡N͞͞҉́G͏̢̀͘͘!̶̴̨

Wednesday: …How much for the bail?

Retrieved from "https://dickfiguresfanon.fandom.com/wiki/LOL_Dick_Figures_Randomness?oldid=42963"
Community content is available under CC-BY-SA unless otherwise noted.