The arch rival of Wolf, Jackal. He is a powerful sorcerer with unlimited power to powerful spells, curses, and elements. He placed Wolf as his only enemy and ignores everyone else. He is a Russian and has traveled through time to seek out the strongest fighter, but not before becoming apart of the tyrannical corrupt side of Russia. His fighting only consist of power and not hand crafted weapons. He wears a bandana with the emblem of the "Hammer and Sickle."

Given eternal life in the beginning of the Medieval days of Russia, Jackal has devoted himself to the arts of sorcery. He became a fear throughout the land and and a conqueror. Soon he felt that there were none to oppose him with all the land bent to his rule. He wanted a land worthy to conquer. He created a window through time and space to search for a great and prosperous land to wage war against with a warrior to match his strength. Before he left, he left behind a spell that went off in a few seconds that rendered the whole land and its inhabitants to ash. He soon found one in the Dick Figures Universe and many beings with great power. he looked through many of them and found one in particular. One who was cunning, strategic, clever, unpredictable, calculated, and a born killer. What interested him was how Wolf fought on the good side, but tended to show signs of dark deeds. What really caught Jackal's attention was Wolf's deadliest ability "Primal Rage Mode". Soon he would make his presence known to Wolf and stomp out anyone who got in his way. His goal to become the most powerful warrior.

Samples of this power. 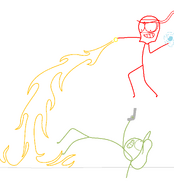 Retrieved from "https://dickfiguresfanon.fandom.com/wiki/Jackal?oldid=40841"
Community content is available under CC-BY-SA unless otherwise noted.