Foully the parrot one day came to Wolf's place in the woods and began to make himself at home. When Wolf came back to his cottage, he found the bird sitting on his sofa watching many movies with a lot of swearing and after an aggravating event Wolf decided to keep the damn bird.

Foully had a decent knowledge of the english language and understood human conversations, but when he arrived at Wolf's home watching a whole lot of swearing movies, he also developed a foul mouth and understanding of the meaning of each word. Before he came to Wolf, everywhere else he was rejected for having a mind of his own and not doing what he has been told. Then after getting to know Wolf and being accepted for his new foul language, Foully decides to get revenge on the whole world by talking shit to them. He excludes Wolf from his revenge because Wolf actually enjoys hearing him talk shit to everyone. 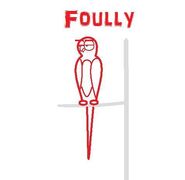 Retrieved from "https://dickfiguresfanon.fandom.com/wiki/Foully?oldid=40845"
Community content is available under CC-BY-SA unless otherwise noted.