To show you that this fiction is real, check out the first scene of the story!

The Fiction starts off in Elementary School showing off young versions of Rapper, Bruce, Steve, Holly, Wolf, and Fox. Rapper has been a bully for almost all his life when he was a kid and was often backed up from his nice friend Bruce. Steve saves Holly from being bullied by three older girls, as the two form a strong friendship. Wolf is saved by Fox where she and Stacy start forming a bond with Wolf, growing on his personality.

Many years later, the group are catching up to their normal activities, where Broseph plans on asking Wednesday to marry her. Steve is also planning the same thing with Holly, and Bruce and Rapper have now turned into worst enemies.

The villains start their attack on the city, when the group notice Wolf has gone missing. Half of the group decide to go and find the villains while the other half stays at home protected by Wednesday.

It isn't long until demons come and take most of the people of the other group, including Blue's family. The others defeat Earl Grey and Gerald Butler as Saigron takes their souls. The group eventually find out that the others have been taken and Shawn goes off to find them, but is shortly taken by Jackal.

Steve finds an enraged Holly, who is angry at Steve for not protecting her during the war and that he broke his promise of protecting her. Holly dumps Steve, who sadly goes back with the others. Bruce goes to find Fifi, who ran away from the group. He finds her but finds Rapper as well. After arguing, Rapper starts making fun of Bruce, and even insulting him. Bruce, fed up and annoyed, attacks Rapper and accidentally hits Fifi, who now becomes scared of Bruce.

Spark is able to find Jess but she is also angry at Spark for not protecting her when he should have. She leaves, only to be taken by Dark Doom. Magnos and Shock arrive to kill the others, but Magnos is killed by Trollz0r, who then gets killed by Shock. After saying his goodbyes, Trollz0r dies and the others go to avenge him. However Vio has come head to head with Let, who we soon find out is Vio's sister.

The two sisters duke it out in a fight during their conversation, but their fight is interrupted by Damon, who comes to protect Let. Vio tries to convince Let about her past but Damon is taken by Saigron, while the two sisters head back to Wolf's cabin.

Shock soon goes after Holly, but Steve jumps in and defends her. During the fight, Steve kills Shock but is badly injured. Steve slowly dies after Holly apologized to him. Holly has no choice but to head back with the others.

The group decide to go and fight Saigron, when Wolf walks in and is found out to be alive. After agreeing, the group go to find Saigron while Wolf goes to look for Bruce.

Bruce is able to find Fifi but finds out that she is under Saigron's control, as well as the other people Saigron took. The others fight Saigron while the villains decide to help too. Unfortunately, Darla has no choice but to kill herself to release her demon. Saigron then lets out his powerful blast, almost killing everyone.

Wolf sacrifices himself to release everybody from Saigron's clutches. Everybody goes after Saigron and beat him down, when Darla flies in, alive and no longer containing the demon she had. After being defeated, Saigron disappears

Everybody reunites with their friends and couples while Bruce and Rapper decide to become friends again, as Fifi now declares Bruce is her new taco. Spark proposes to Jess, and she says yes, as well as Broseph who also asks Wednesday to marry him, which is a 'yes'. Holly apologizes to Steve for being a dick and he asks her to marry her, and she says yes.

While everybody is drinking at Drunken Bear, Wolf sits on a mountain hill, slowly dying as his last words are: "This is the end of the Wolf... The Lone Wolf... who dies alone." shortly after, Wolf dies.

DFFU was first announced in 2013 as was originally titled Dick Figures The Movie 2: The Fanon Movie, but was later changed to Dick Figures: Fanons Unite.

Shortly after it's announcement, writing for DFFU began in November 2013, and finished writing on May 15th, 2014. It was originally scheduled to be released in July, but was pushed back most likely due to the writing being complete.

Since it's release, Dick Figures: Fanons Unite has received mixed to negative reviews from users.

User AndrewBrauer gave it a positive review with a score of 3 out of 5. He said "DFFU is a mess in terms of plot construction and characters, but it does engage me in a strange way with its overall story, even if it's not the most original, all I know for now, is that now after DFFU there will be many new changes and events in the future to come, and I can't wait to be a part of it."

In April 2015, a sequel titled Dick Figures: The Revenge was announced, and is directed and produced by Andrew Brauer and YoshiRocker13, and scheduled for a release date on May 8th, 2015.

Clip 1: The meeting of friends 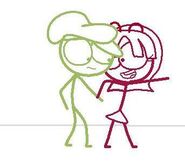 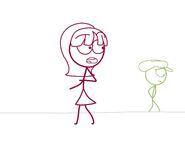 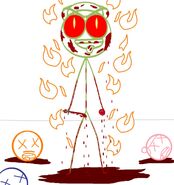 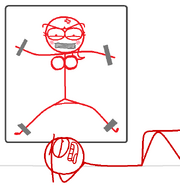 Carrie getting kidnapped by Red

Spark getting enraged and sad when Trollz0r dies

Damon unleashing all of his rage

The death of Wolf. The Lone Wolf. Who dies alone. 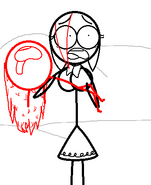 Madelene carrying her daughter.
Add a photo to this gallery
Retrieved from "https://dickfiguresfanon.fandom.com/wiki/Dick_Figures:_Fanons_Unite?oldid=43892"
Community content is available under CC-BY-SA unless otherwise noted.