Dark Doom is one of the masters of evil. Unlike Earl Grey, Jackal and Saigron, Dark Doom will do anything he can to take the earth for himself and kill anyone who gets in his way. Dark Doom lives on another planet but can travel to other planets to take them for himself.

One of Dark Doom's abilities is his fire power. He can create huge fire storms and blast them at enemies. Dark Doom can also use fire to create lava, heat and most dangerous his fire storm. Dark Doom has a purple arm which is actually his dark arm which is used for dark powers. When using this power he can instantly poison whoever he touches with his arm.

He also has an upgrade called Shadow mode. To tell when this is happening, Dark Doom's eyes turn purple and his pupils turn red. He will unleash power and could kill a person in a single blow. And as shown in Arrival of Doom, using dark energy, he can control anyone he uses it on. But they revert back to normal when Dark Doom is defeated or disapears.

Dark Doom's voice when he is in 'Shadow Mode'

"Are you worthy enough, young one?" 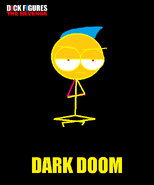 Add a photo to this gallery
Retrieved from "https://dickfiguresfanon.fandom.com/wiki/Dark_Doom?oldid=39007"
Community content is available under CC-BY-SA unless otherwise noted.