Start a Wiki
Charlotte Hagistaine is a fictional character in the Dick Figures series. She was Blue's girlfriend, but she was forced to break up with him because she had to move away to help out her mother with health problems. Now that she has moved back, she wants to start her relationship with Blue all over again, but with Pink in the way, she of course can't. Her undying love for Blue and to get him back caused her to go slightly insane, but usually not in public.

In Another Freaking Adventure with Batman and Bloser, she is held captive by Gerald Butler and some other butlers, and ends up falling underneath the train before Pink Avenger could grab her. She is most likely dead.

Ever since Charlotte found out Blue and Pink are dating, she hasn't really been social to anyone lately. People know she is pissed about it and is acting a little crazy, so they don't really talk to her as much as they use to before she moved away. Blue knows of her craziness, so he's now afraid to approach her. As of Season 3, he now starts to see her more like a friend. Even Pink was willing to save her when she was held captive in Another Freaking Adventure with Batman and Bloser, however she wasn't able to save her before she fell underneath the train.

Because of her strong hatred towards Pink, she would try to come up with plans to destroy her, but she fails. She and Jesse sometimes would end up physically fighting each other over Blue until Jo and Roy separate Jesse from her.

She would often go to Wednesday and Indigo to hang out. She used to be friends with Red during her and Blue's relationship, but after moving away, Red completely forgot about her. The only thing she can so far say she dislikes about Red is that he has way too many girls to "bang". She does worry how this could effect Red and Stacy's relationship and has this urge to tell Stacy about this, but Stacy is too stupid to realize it. Stacy, however, is aware of Charlotte's hatred towards Pink, so she doesn't like Charlotte.

She hates Broseph and Lord Tourettes for reasons unknown. The thing is, however, both of them haven't even met her yet. Darla tries to ask her why, but Charlotte then yells at her for some reason and tells her to "fuck off and go back to mourning over that bastard best friend of hers", making Darla fly away crying. What Charlotte said to Darla might hint that she doesn't like Earl Grey either. Later on, Indigo persuaded her to go apologize to her, for there was no reason to yell at Darla in the first place. Charlotte does so as she was told, and Darla forgave her. However, they're still not exactly friends.

Ever since she got a job at Putain Délicieux, she and Madelene became real close. Madelene is so far the only friend Charlotte can truly rely on.

She started to like Rapper after he saved Wednesday from Bruce. She also thought Rapper was pretty cool. 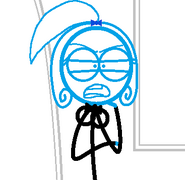 Charlotte (wearing her work clothes) starring in her own episode, Good Charlotte.

Charlotte with Blue and Rapper in A Day with Rapper

Charlotte talking to Blue in Break Up

Charlotte hugging Blue in A Day with Rapper.
Add a photo to this gallery

The voice of Brittnay Matthews from The Most Popular Girls in School.

Retrieved from "https://dickfiguresfanon.fandom.com/wiki/Charlotte?oldid=41476"
Community content is available under CC-BY-SA unless otherwise noted.